In 2016, Herrmannsdorf celebrated its 30th year as a company. Karl Schweisfurth has been the managing partner for the last 20 years. Today, we employ about 200 people, and more than 100 farmers throughout the region supply animals for our slaughterhouse.

The story of Herrmannsdorf is bound up with our philosophy. Karl Ludwig Schweisfurth, the Father of Karl Schweisfurth, owned a major European meat-products company for many years. Herta had six production sites, annual sales of over DM 1 billion, and more than 5,000 employees. During the 1950s, he played a large role in the industrialization of meat production in Europe, initiating revolutionary changes.( They slaugtered about 20 000 pigs a week; today Tönies slaughter the same in one day!!) His inspiration came from a visit to the famous slaughterhouses in Chicago.

Starting in the 1980s, he was plagued by doubts about this form of business: the processes had become so standardized that demand no longer existed for a master butcher‘s skills. He was especially disturbed when he saw the conditions at the farms producing pigs for his plants – and by the pressure from retailers to drive down production costs, even at the cost of ethical principles. His own children criticized his way of life and this style of doing business. None of them wanted to take over a company like that. 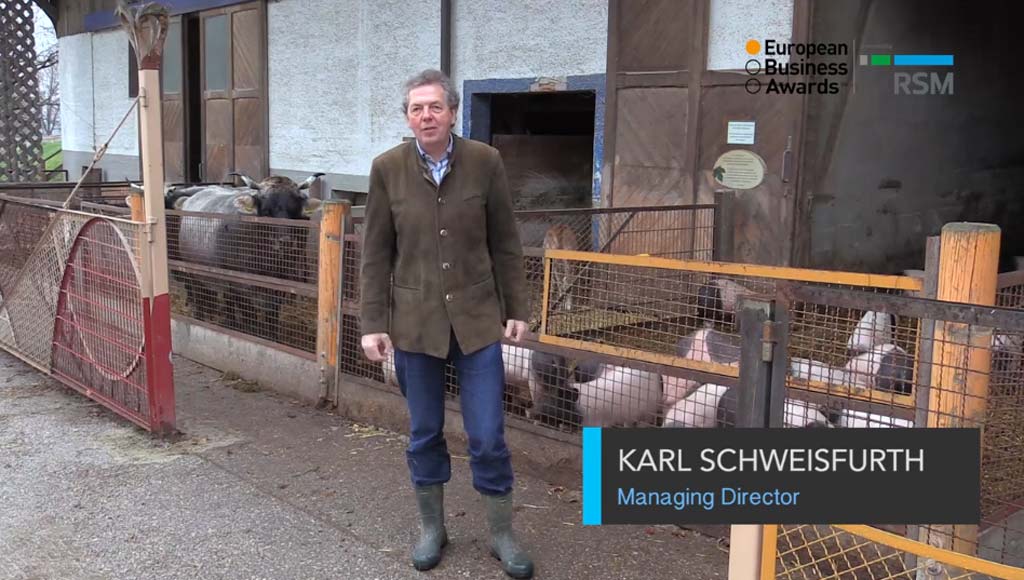 The turning point came during his period of seclusion in 1984. He decided to sell the family company and start over with something small, manageable, and on a human scale. He wanted to reunite the separate elements: farmers, skilled laborers, and sellers, who are the conduit to customers. His motto – and that of the foundation he established at the same time – was „Life and Work in Greater Harmony with Nature.“ The idea was to revive the vanishing skills of craftsmen like butchers, bakers, and cheese makers, while giving the animals that sustain us a life worth living.

From the very beginning, our company has honored principles beyond efficiency and standardization, and believed that ethical values matter just as much as products and prices. These values include dignity for both humans and animals; a thoughtful relationship to nature, the water, and the soil; and respect for good old craftsmanship.

In the early years, Karl Ludwig Schweisfurth, was often dismissed as a fool for thinking this way and it took a long time to convince people that not all schnitzel is alike: that critical differences exist in terms of ethical quality, taste, and health.

Today, more and more people come to our stores because they can taste the difference and care whether their food is healthy and ethically acceptable. Many are eating less meat, and when they do, they chose meat from animals that were treated well.

Balancing economics and ethics is not always an easy task. For example: the farmers who provide our pigs all have smaller farms with no more than 30 to 40 breed sows, which birth litters twice a year to produce about 600 porkers. (In comparison: at factory farms, keeping less than 150 breed sows is no longer profitable, and such operations are disappearing. In factory farms there often live more than 100 000 pigs.

We want to pay a fair price to support regional farming operations that raise animals with humane conditions and local ecological feed. Recently one farmer, a model of good work with animals, told us that his business advisor had calculated his earnings to be EUR 6 per hour now that his operating costs for things like feed had increased. What should we do? If we pay him and the other farmers an adequate price, we have to charge more for the ham, sausages, and other products at our stores.

We try to communicate to our customers and explain these issues. As a result, we see ourselves as intermediaries between farmers and consumers. Together, we calculate how much we can pay the farmers. Honesty with our customers is very important in this context. When they know that we are open and truthful with them, they‘re willing to pay more too.

From every euro we make, 40 percent goes to the farmers and another 40 percent to the craftsmen – the many skilled workers employed here. The profit margin of 3 percent makes us all happy: the farmers, our employees, and customers who want sustainable sustenance.

We hope that this brief introduction has given you a glimpse into our company and wish you a wonderful day in Herrmannsdorf. Perhaps you can find inspiration in the lovely surroundings and the vision of living and working better in harmony with nature. Above, all, we wish you „guten Appetit“ for our products.

They not only taste good, they do good.